Well it has been a fascinating first full week of opening our shop. It was wonderful to be able to get feedback from everyone who has visited over the last two weekends when we have had cheese samples available for everyone to try.  A huge thank you to all the customers who have been in, it has been lovely talking to you all.

It been a busy week too, we had some extra advice from our cheese microbiologist a fortnight ago so we have been trying out those ideas on the cheese making too.  Leaving the soft cheese to mature a little longer before salting to increase the intensity and adjusting the pepperiness of the Chalvedon hard cheese. 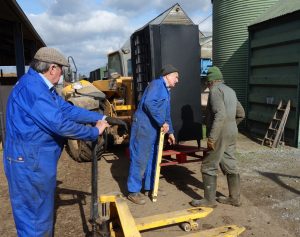 Nick, Billy and Dennis and machine 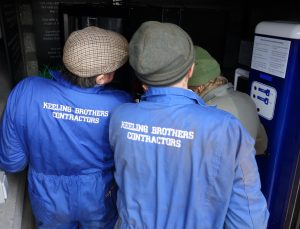 Do you think it will go in?

But the big project for the week was vending machine number two.  It arrived on Monday a week later than we had hoped.  Whilst it did fit in the space we had made for it, it blocked the power sockets so we have had to have those moved before we could get it in the shop, creating yet another job for my Dad, Nick, to do.

After it bending the pallet it had been sitting on we called for reinforcements to help us move it.  Billy and Dennis Keeling came to the rescue and gave us a hand.  We fork lifted it as close to the shop as we could and carried it through from there.  Which we couldn’t have managed without their help. 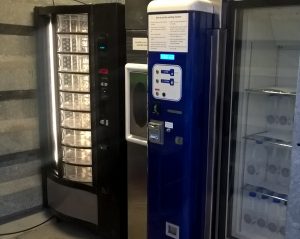 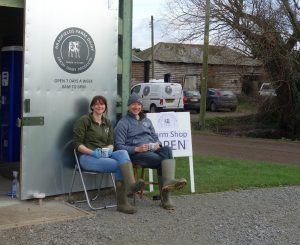 Finally in situ we came to the task of interpreting two massive books of instructions to fathom out its operation.  John persevered with the daunting task and is now master of the vending machines, except its little quirk of hating 10p’s and refusing to give them in change.

So it has been in use over the weekend for cheese, cream, skimmed and semi-skimmed milk making it much easier to set up the shop and samples this time giving us time for a quick break first thing before we got started.

On the farm it has been a very stressful fortnight.  My Dad and Sister were summoned to a meeting with Muller, who currently take the bulk of our milk.  The meeting was to give us and about 18 other farmers notice on our contracts as they are cutting all milk collections from East Anglia.  We were half expecting the news as they announced the closure of Chadwell Heath Dairy a few months ago and that is where our milk they collect goes.  The rest of the Chadwell milk will be going to the west country for processing.  Fortunately Arla are looking for a small number of milk suppliers at the moment and have given a once only offer to farms affected, a bit of a turnaround as they gave notice to one of our neighbours only a year ago.  A couple of the other farms have told us enough is enough and they are going to give up so we could be down to 5 dairy farms in Essex before long.

So a worrying time, without a new contract we would have to have given up too, our new milk shop helps the situation but not enough yet to have survived without a main dairy collecting.  But we have gone with the Arla offer so that should give us some stability for now. We also think with the closure of Chadwell heath that we will be not just the only on farm cheese dairy in Essex but the only milk processing dairy in Essex too. 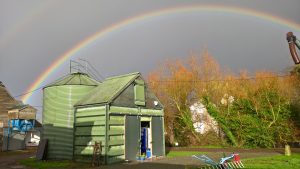 Now that the rain has gone

A few more bits to do next week, we will be updating the website with information about all the products and hopefully getting our banners up on the granary and roadside if it is not too windy now storm Doris and Eric have both passed us by.

Thank you for all the positive Facebook reviews and comment and we hope to see some of you again soon and some new customers too.