Our new cheese maturing room, an ex-chiller lorry, was turned on for the first time on Friday. It is all working, so we started the next batch of cheeses today with a 10kg make of Chalvedon our Tomme style cheese.  We are going to try salting it with three different levels tomorrow to see which level comes out best.

The walls are all finished in the milk dairy and the floor will be going down in the next fortnight. With the equipment on the way in six weeks time there is lots to get finished quite quickly.

On the farm they are having to cope with the effects of the rain. They had a lovely heifer calf born on Thursday, we will have to think of a nice name for her. 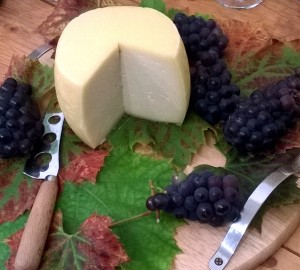 I can’t believe 2016 is already here, we have had a really busy few months, during which have been refining three of our cheese recipes.

The first is a Tomme, alpine style which we are calling Chalvedon, this is named after Little Chalvedon Hall which is a farm we rent nearby where we keep our young calves and heifers before they join the herd. 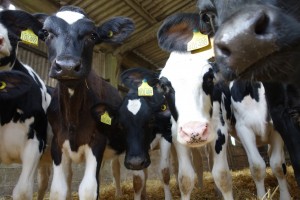 The second is a soft cheese which we are thinking of calling Dulce after Dulce Domun, a small house round the corner from the farm which is latin for sweet home. This has a very fresh slight acidic taste so we are still thinking about whether this is the right name.

Finally we are still working on a crumbly hard cheese which is called Westcroft. This is named after the house where my grandmother lived in Burntmills Road in the 1920’s. She met my grandfather who regularly walked past from his home Elm Bank in Hove Fields Avenue and from Bradfields when his family moved there in 1922. This cheese takes three months to mature so will take longer to refine. 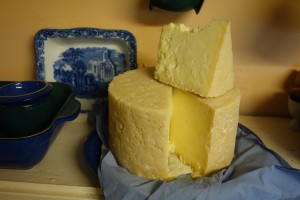 The biggest challenge we have been having is storing the cheese in the right conditions so at the moment we have only been able to make one type and mature it at a time, but we have just put in a chilled container which will give us space to make all the cheeses regularly.

As well as the cheeses I have completed my level three food hygiene training and we have been moving forward fast with a small scale milk pasteurising plant. We are setting up a space for this inside our barn, and are in the process of recladding the internal walls this week. The equipment will be going in in February and March and we hope to be up and running with full fat, semi-skimmed and double cream on sale from the farm by late spring/early summer.

We have been out and about speaking to a handful of local farm shops to see if they would be interested in stocking local Essex milk as well and will be back out with samples to more shops, cafes and restaurants as soon as the plant is up and running.

It has been a busy time on the farm too. We still have some cultivations to do though it is far too wet to do anything in the fields at the moment. But with all the animals in for the winter keeping the yards bedded with straw and the girls fed is a big part of the daily routine on top of the normal milking.