Our pond has long been home to a collapsing, formerly floating duck house. We are as a family rather fond of ducks (my nieces very favourite animal) and always love to see them on the pond. I wouldn’t like to say how many hours of mine and my sisters childhood were spent trying to get the ducks in to keep them safe overnight but we gave up the battle of pet ducks versus foxes many many years ago. If they wanted to stay out all night at least we could give them somewhere safe for them to stay, and that was when the floating duck house was made. 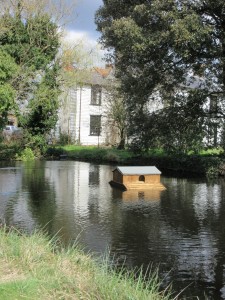 We have been thinking about doing something about the duck house for some time but despite its poor condition the duck house has been home to Mr and Mrs Moorhen for years. They usually produce two broods of black fluffy balls with long feet each year and we knew some were on the way as they had rather aggressively chased off the remaining offspring from last batch last month.  So with Mrs Moorhen possibly nesting we couldn’t go near the old duck house so instead we finally got round to having a new one made. Launched with fingers crossed a few weeks ago it floated beautifully and has sat empty ever since.

Mrs Moorhen emerged at the weekend with 4 of 5 (they are hard to spot sometimes) new babies and promptly re-located from old duck house to new which was lovely to see but more was yet to come.  It appears that rather than desire to live in a new build she was escaping noisy neighbours, hidden away in the other half of the old duck house a wild Mallard was nesting too.

She emerged briefly at the weekend with half a dozen cute ducklings, only to retreat back inside and come out today with more.  We think there are 18 baby mallards in total scooting around the pond in all directions with surprising bursts of speed. With two sets of parents as well the pond has never been so busy and there are quite literally babies everywhere you look. 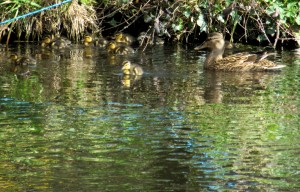 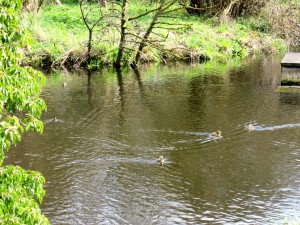 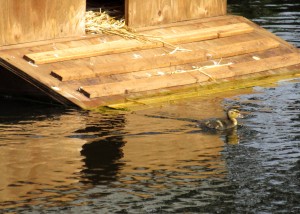 Baby duck near its’ new home